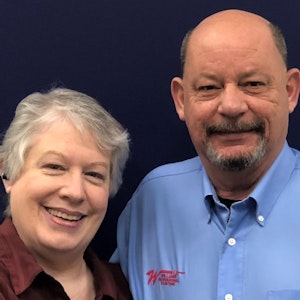 Dave and Mary’s story together began when they met at a young age and were married in April of 1977.

Despite the fact that some may have considered it to be bad timing, just two years after being married, and with the country in a deep recession, long lines just to buy gas, and a newborn baby, Dave and Mary began their pursuit of the American Dream. The three of them made up the Williams family and founded what quickly grew into Williams Professional Painting.

In the decades that followed their adventurous start, the business has grown to include 45 employees. And, their newborn baby in 1979, Rick, is now the Vice President of the company. With all of their employees in mind, Dave says that “One of the greatest rewards of running a business is being able to provide jobs for so many people.”

Dave and Mary believe that running a family business creates the opportunity for a different kind of climate than a lot of other businesses can have.

“While we always maintain a proper business structure and environment, at the same time we see all of those that work with us, as well as our customers, as a part of our family, not just employees and customers. That makes it special and we feel an obligation. We also realize that as a family business our name is on everything we do and stand for, from the way we treat those that work with us to the customer satisfaction at the end of a project. It’s all a reflection on the family name and what it stands for.”

After raising their three children and building the company from the ground up, they continue to enjoy spending time contributing to the business.

When not at work, they enjoy watching football together (Dave is a fan of The Washington Football Team while Mary is a Giants fan) and being with their two grandchildren.

Dave’s “stress buster” is to spend time cooking on the weekends. In fact, Saturday mornings usually begin with a trip to the grocery store. Mary’s “stress buster” is watching as many movies as she can and putting together jigsaw puzzles made from pictures they have taken over the years, while also being the test guinea pig for some of Dave’s cooking creations.

Whenever there is time for a vacation, their choices would be the Corolla Beaches in the Outer Banks of North Carolina, the Shenandoah Mountains, or the Great Smoky Mountains in Gatlinburg, Tennessee.

Meet the Rest of our Team

Residential Commercial About Join Our Team Get an Estimate